Landlords and owners putting their homes on the market are being told to show off gardens in marketing photos as house-hunters search for space.

Pictures of the kitchen had previously been considered key to attracting the attention of browsers.

Lockdown has changed the priorities of buyers and renters, many of whom have been working from home, research by property portal Rightmove suggests.

Flats are the big losers, as indoor and outdoor space becomes a bigger draw.

Rightmove said that a studio flat was the most sought-after property type among renters in January, but by May - after the coronavirus lockdown - it had dropped out of the top five. A two-bedroom house is now the biggest attraction.

Moving further out of town

Flats have also dropped out of the top five wanted list among buyers, calculated from the number of enquiries per property of each type.

Many people would usually have been priced out of larger homes with big gardens, but indications suggest they are willing to accept a longer commute in order to cast the net wider for an affordable property.

The property market was effectively shut down for weeks owing to the coronavirus pandemic.

Since the easing of restrictions in England in mid-May, property portals and estate agents have reported a surge in interest. Some believe the rebound will be short-lived owing to inevitable economic pain which will follow the outbreak. 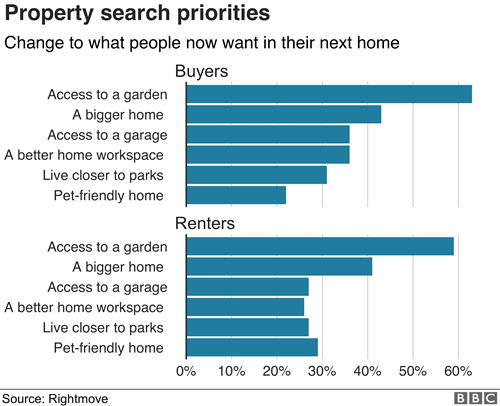 At present, interest in property is high in some areas. Lockdown break-ups, job losses and urgent relocations are thought to have led to a surge in the rental sector.

This is dependent on the area. Coastal towns, and some urban areas have seen significantly higher rental demand, topped by a 51% increase compared with last year in Wolverhampton, Rightmove data shows.

However, London and the commuter belt of south-east England have seen demand fall, with the biggest drop of nearly 14% compared with last year seen in Croydon.

Property sales plunged during lockdown, but at the same time renters and buyers appear to have reassessed what they want in a home.

Now the Rightmove research for the BBC, based on the website's data and a survey of 4,000 potential movers, has suggested 49% of renters and 39% of buyers have changed what they are looking for as a response to living in lockdown.

As half of those asked wanted to work from home with only occasional trips to work, a third of movers wanted a better domestic workspace.

Good internet and a spare room are now higher up on wish-lists, but commuting times and transport links are less important, the survey found.

The good Spring weather seems to have made one of the biggest impacts on intentions.

"Both buyers and renters are craving a home with its own outside space rather than a flat," said Miles Shipside, Rightmove's housing market analyst.

Searches by buyers for homes with gardens on Rightmove were up 42% in May compared with the same month a year ago, and increased by 84% over the same period among renters.

"Usually home-movers tell us the kitchen photographs are the most important when they're looking at a property advert, but now agents should consider giving greater prominence to pictures of gardens and outdoor spaces to attract the attention of prospective renters and buyers," Mr Shipside said.

He said sellers should consider painting the fence and clearing out the shed to make a property more attractive and landlords should ensure a communal garden has been included in any rental listing.

The demand for outdoor space has been seen before, but could fizzle out as sellers with gardens raise their asking prices accordingly.