A hidden garden within the grounds of Glenfield Hospital in Leicester, is set to see its kitchen garden grow with the support of Leicester based garden product manufacturer, Vitax Limited. 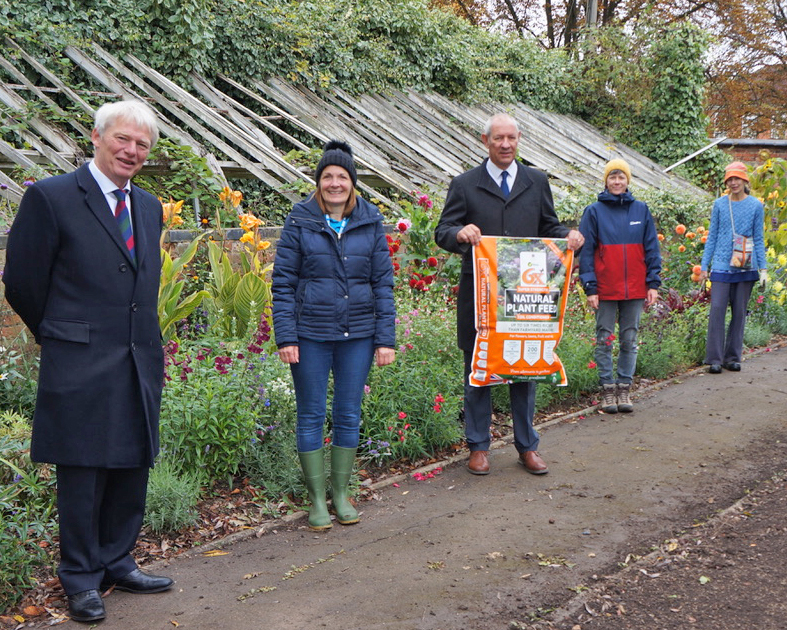 The Secret Garden project has received a generous donation of 6x Natural Plant Feed from Vitax to help recreate and nourish the organic garden as part of a wider restoration project to rebuild the historic walled kitchen garden.

Providing a therapeutic environment for patients, visitors and staff, the garden is being brought back to life by a small project team and a group of enthusiastic volunteers, whose fundamental purpose is to create a space to enhance mental health and wellbeing.

The garden has a potted history dating back to 1610 when the land was originally owned by the Duchy of Lancaster.

Fast-forward to the 1990s and after a period of neglect, a new multi-faith, sensory garden was created for adults with a range of disabilities including visual and hearing loss, before being handed over to Glenfield Hospital in 2016 which is when The Secret Garden project came to life.

“The Secret Garden project is a fantastic initiative. Driven by the project lead and volunteers who are not only passionate about restoring the walled kitchen garden, but passionate about creating spaces for patients to convalesce and for staff to take a well needed break in a peaceful and reflective environment,” says Vitax’s chairman, Paul Gooding.

“Vitax is an ardent supporter of charities which have a focus on improving mental health and wellbeing through gardening and this is a key focus for The Secret Garden. It has a ‘feel-good’ factor and not just for hospital staff and patients, but also the volunteers who are restoring it.

“It is a great asset to the hospital and we are delighted to be able to support a local charity and give back to the community,” says Paul.

The Secret Garden has featured on Channel 5’s ‘The Great Gardening Challenge’ as well as Breakfast Television’s Lorraine, but there is still much more to be done as Karen James, Secret Garden Project lead, explains: “In total, The Secret Garden project will fully restore an acre of Victorian walled gardens.

“It currently features graveled walkways with climbing shrubs, seating areas for visitors surrounded by flowers which offer privacy, a calming water feature, rare apple trees, fruit and vegetables and recently installed raised beds which are filled with herbs and flowers.

“However, there is still a lot to do. We are sympathetic to the rich history of the site and want to retain its heritage as much as possible.

“Every part of the garden which has currently been restored is carefully thought out to bring a range of health benefits. It is very calm and the plants help to increase stimulation and awaken the senses to the enjoyment of not just patients and families, but also the surrounding communities.

“We are thrilled that Vitax has chosen the project as one of its beneficiaries. Without businesses being involved it would be very difficult to complete some areas of the garden and Vitax’s donation will be adding much needed nutrients back in to the ground to help our plants thrive.”

To find out more about The Secret Garden project, or to volunteer, please contact:  thesecretgarden@uhl-tr.nhs.uk