It is all very well getting a tree cut down, but you are still left with the stump and the roots in the ground. 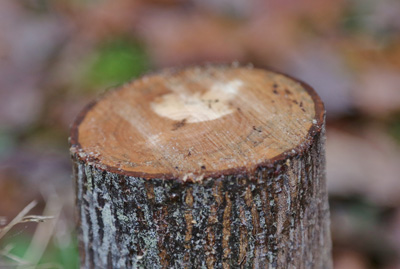 Some species respond with vigorous regrowth and if you are not careful you could be back to square one in a few years if you do not prevent it.

Another thing to look out for is a tree that produces abundant fertile seeds which go unnoticed in your garden until saplings develop and soon establish themselves into young trees. Dealing with them at an early age is essential to avoid the cost of removal of more mature specimens; that is if you are allowed to. Remember that some trees are protected and mature specimens of even self-sown trees may be the subjects of tree protection and conservation orders.

Which tree stumps are likely to regrow?

Of the native hardwood trees sycamore, Acer pseudoplatanus and ash, Fraxinus excelsior have the ability to grow vigorously from the stump when felled. These two are also the worst offenders when it comes to seeding. The young saplings are deep rooted and can be difficult to remove. Oak, Quercus ruber will sometimes regrow and it too can produce abundant seedlings.

Eucalyptus and acacia both have the ability to grow vigorously when cut down. In their native habitat this is an adaptation to forest fires. If you do not want them to regrow act swiftly after felling.

Conifers on the other hand never regrow. So if you cut down a Leyland hedge it will not regenerate from the base, however those resinous stumps will persist, taking many years to rot down. During this time they are an obstacle to replanting.

What are the options?

If the tree is small, the ideal solution is to dig out the stump. If tree removal is part of a project in the garden then ask the contractor to remove the stump with a digger. You will not remove all of the roots, but the main base of the tree is easily lifted with a digger; this is always the best option if taking out a mature conifer hedge.

An alternative is stump grinding. Tree surgeons will grind out the stump of a tree once it is felled for an extra cost. Again this does not remove all of the roots but it grinds the base of the tree to sawdust. The latter is produced in abundance. Remove as much as possible, pile it in a corner and allow it to compost for 12months, you can then use it as a mulch. Then add plenty of well-rotted manure, soil conditioner or garden compost before attempting to replant.

If a tree stump is left in the ground it can still be treated to kill it and prevent regrowth. Vitax SBK tree stump killer is the simple solution. Just mix the concentrate with an equal volume of water and apply to the cut surface with a paintbrush; also paint the whole surface down to ground level. This should be done in autumn or winter when the sap is falling. It is worth carving grooves in the surface of the stump using a pruning saw before application. Apply generously allowing the solution to wet and soak in to the wood.

Young saplings can be treated in the same way. Cut off the top of the shoot using sharp secateurs and cut a couple of cross cuts into the end before application. This is the perfect way to treat saplings that spring up in grass, along the edge of buildings and in awkward corners where digging out is virtually impossible.

Vitax SBK tree stump killer is a strong weed killer that can also be used on woody weeds, especially brambles. It can be applied with sprayer or watering can as well as by brush to tree stumps. It does not contain glyphosate and does not kill grass, however it will harm other plants if they come into contact with it.